I feel like I haven’t been keeping up with my blog lately, but then again, I’ve also just been getting a lot of stuff done. 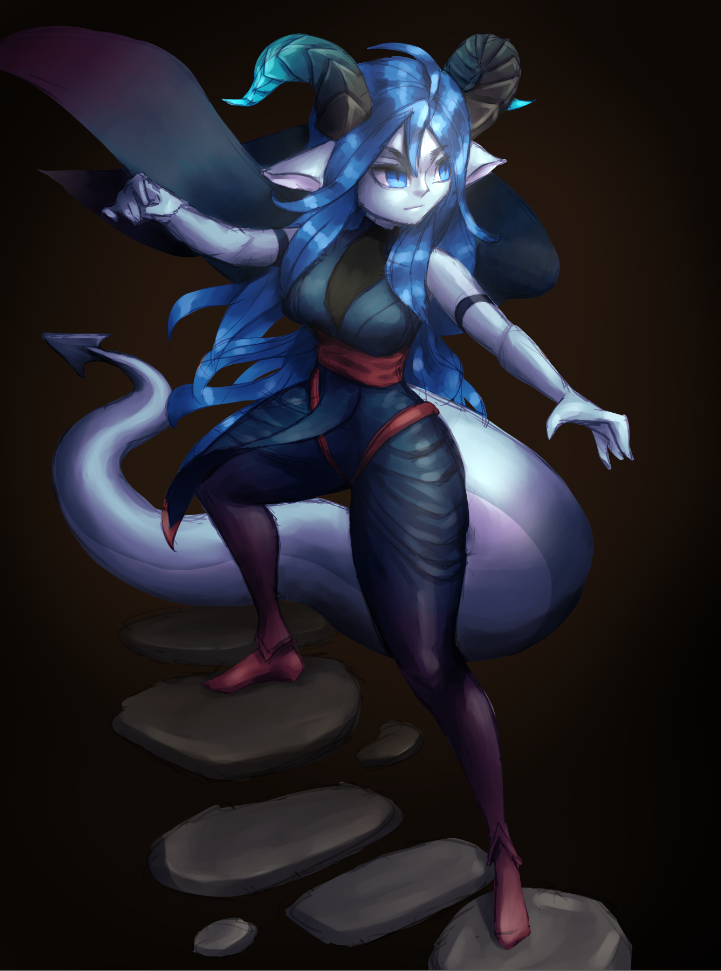 Finished a LOT of stuff on this, an entire shadow pass and lighting pass in about an hour. Phew. Hand’s sore. 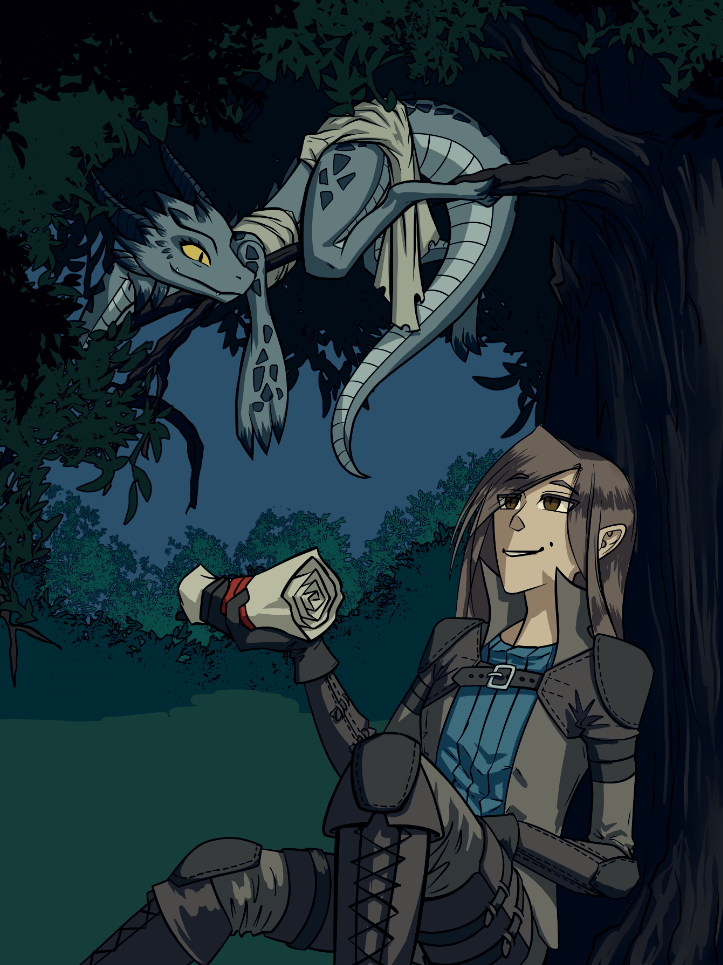 Started the color flats and got most of the way through the shadow pass as well. Still needs some work on the lighting, background work, some gradients, and possibly some depth of field blur. We’ll have to see how that looks.

Man, we’ve been getting insane amounts of stuff done around the house lately, and my shop of woodworking tools has massively expanded lately. Should have put it all on the credit cards, for points or something.

I’ve been really impressed with how cheap I’ve been able to get this stuff. A lot of bargain hunting, though I still can’t figure out how to find used tools around here.

Tools on my radar:

It’s really hard to take pictures of this, but I installed a set of water misters over the deck, and hooked it into our new backyard hose setup (which still needs a hose manager thing), and while it’s been raining lately, we found out last weekend that the misters are pretty dang nice on hot days, and the project was cheap AF to build. It’s also surprisingly high up and easy to adjust; it uses paracord around the tree and some adjustable friction hitche knots to raise and lower it. 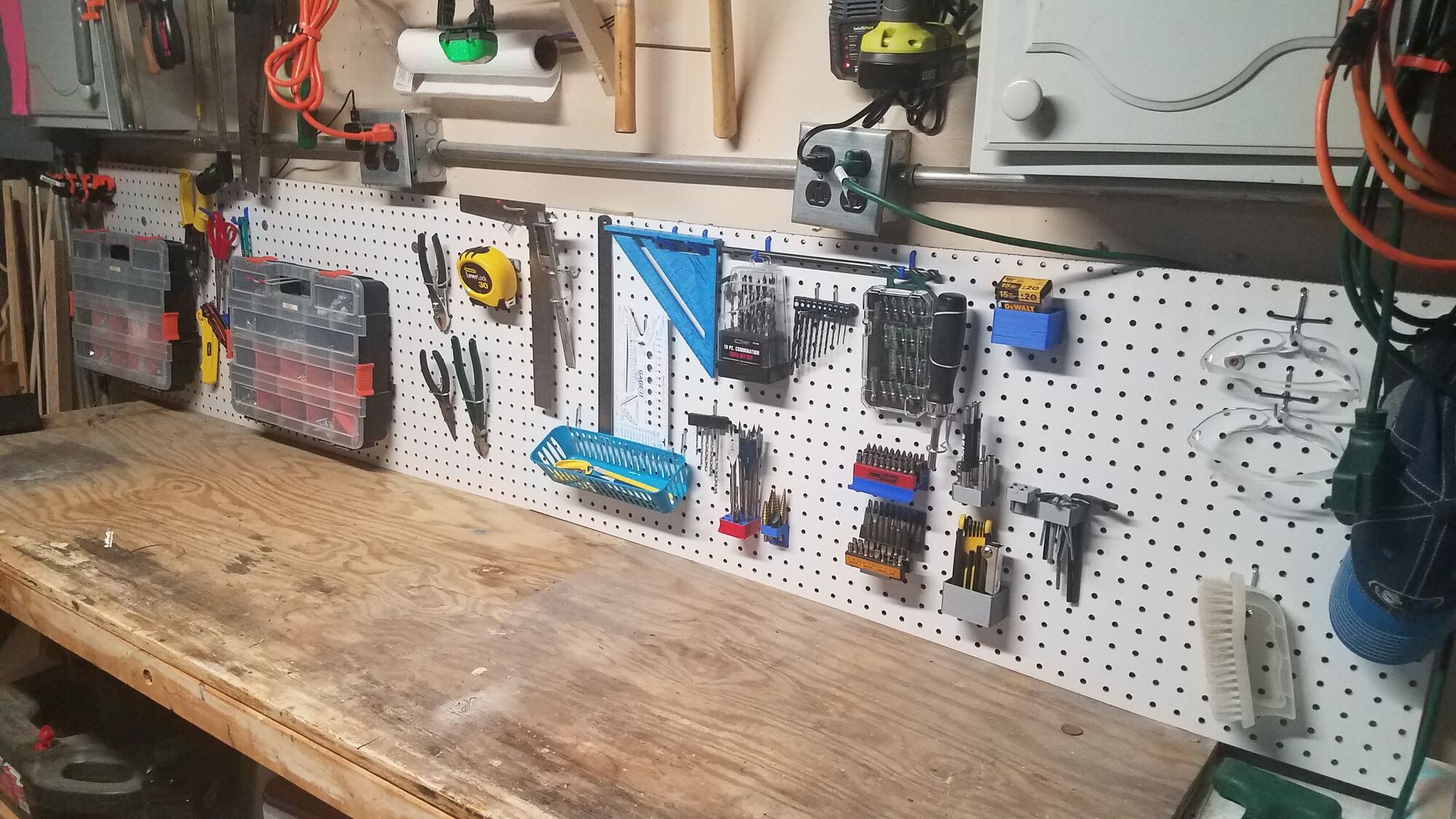 And this isn’t even my final form!

Since this photo I’ve gotten a lot more stuff on the wall, including all my remaining drill bits, more screwdrivers, knives, my mini block plane, and some other odds and ends.

I’m hitting my stride with tools now. I’ve got a 3d printer with which to print custom tool holders for the pegboard, and I have the equipment to build a nice replacement for my miniatures & terrain workbench in the basement. Getting to the point I can do a lot of things myself around here. 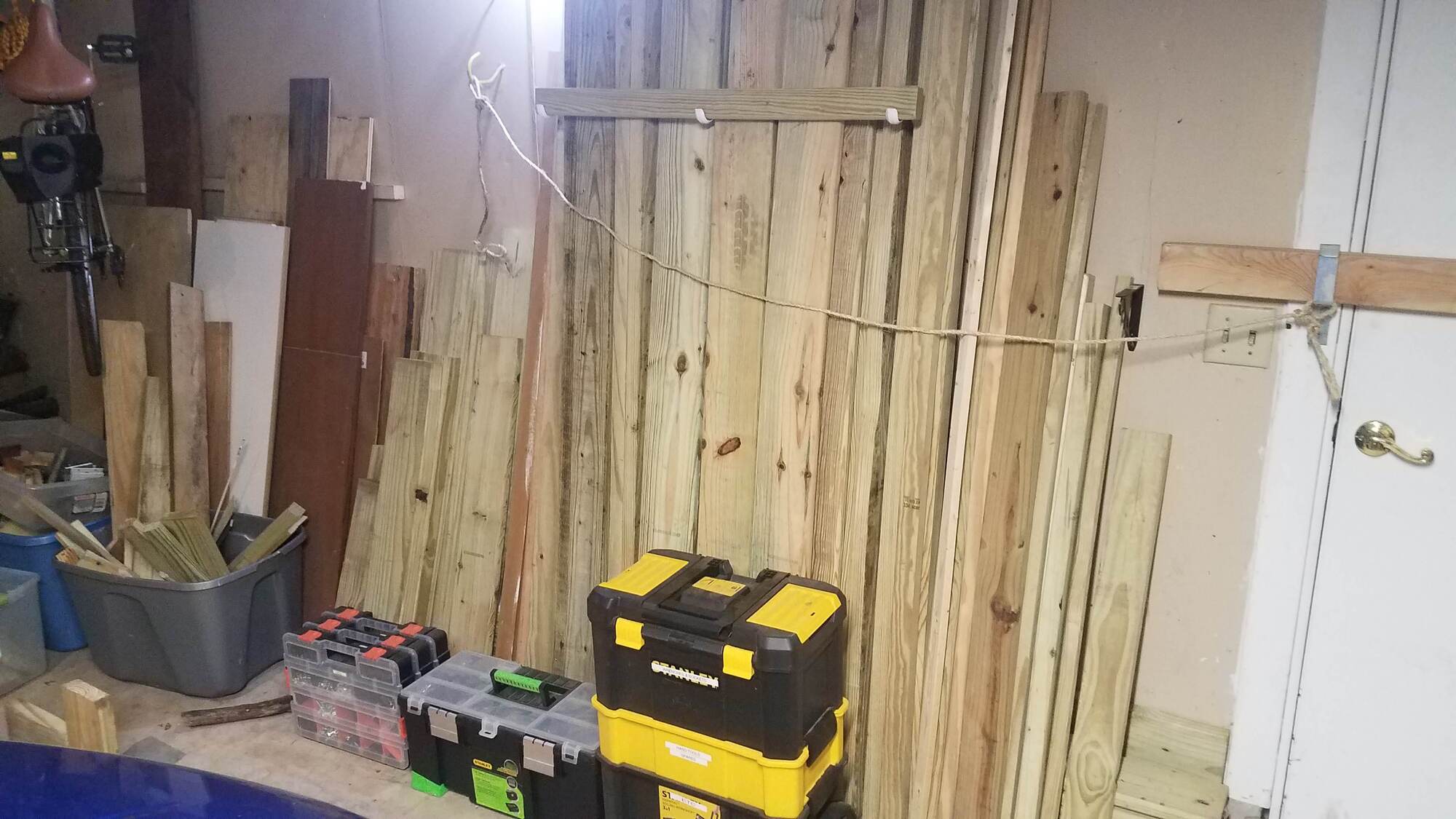 Looks like a lot of wood leftover from the deck, and it is, but a good portion of that was used to make the benches in the next section, but there’s still a goodly amount left over for shelves in the garden shed. Most of that 8 foot stuff is upright, while there are secretly still some 12 footers hanging out under the bottom that you can just barely see in the corner of the photo.

Too bad it’s all AC2. I need to get some cheap 1x pine boards and 2x4s to do interior projects with.

For our nice new deck, I decied to make some benches with the spare wood. The first thing that came up on Google for plans was a reimagined Aldo Leopold style thing by Rogue Engineer.

Unfortunately for me, his is built using 2x8 lumber, which I didn’t have, so I redesigned it to work with 5/4 deck boards, which I have a lot of. 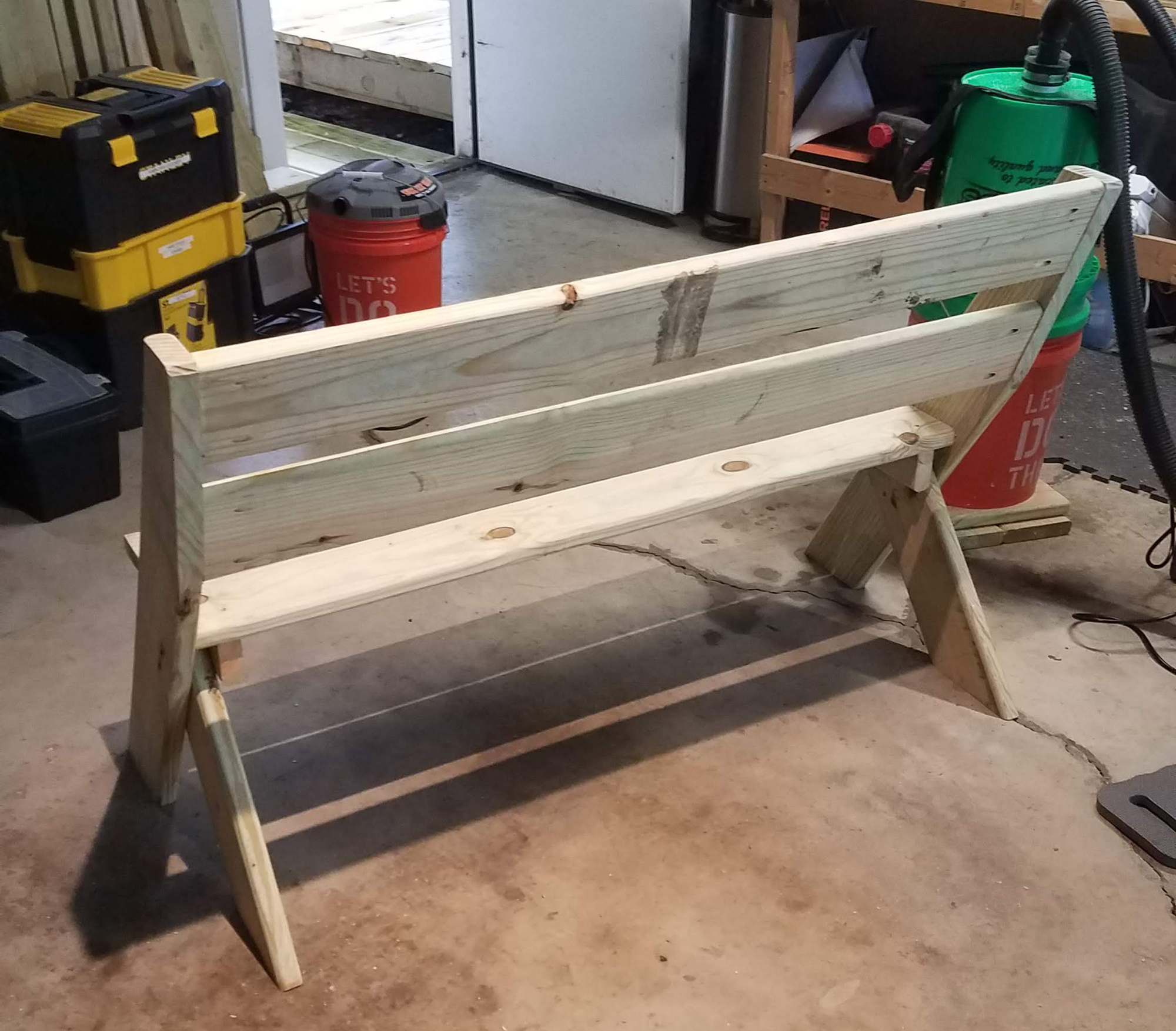 This first one was actually too similar to Rogue Engineer’s, his has a butt joint for the backrest, and his was end-screwed, a bad woodworking joint. So to remedy that, I used my sweet new Kreg jig to put much stronger pocket hole screws in. 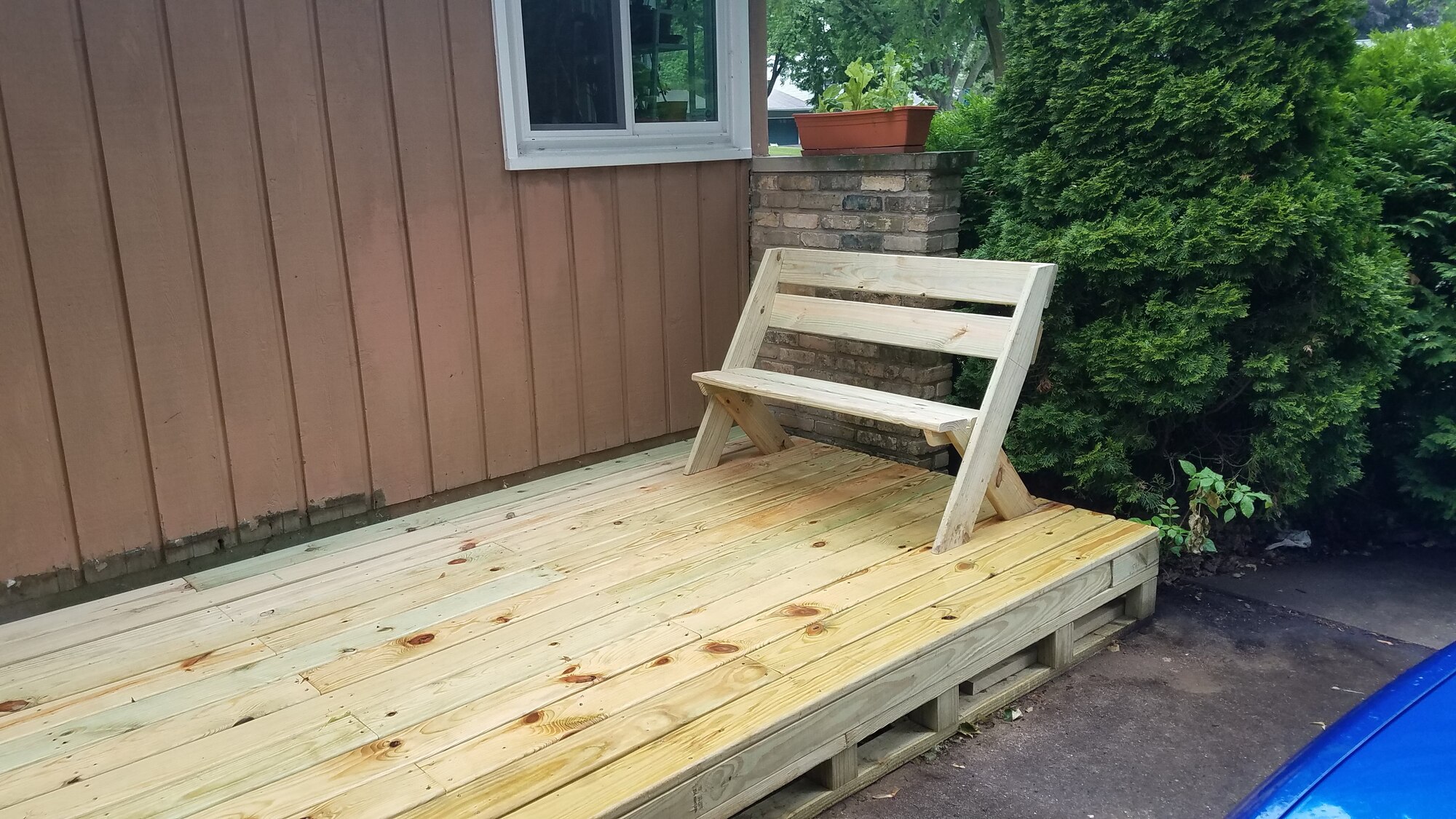 It’s hard to see, but I did something different with the second one. I shortened the seat by a couple of inches and did a lap joint for the backrest, making it both easier to assemble and probably stronger.

For the backs of these, I made one of my first table saw jigs, a taper jig using those drinking-bird-shaped clamps, and a piece of shelving. Worked surprisingly well.

New deck is working great, so here’s a photo of it in its natural habitat. 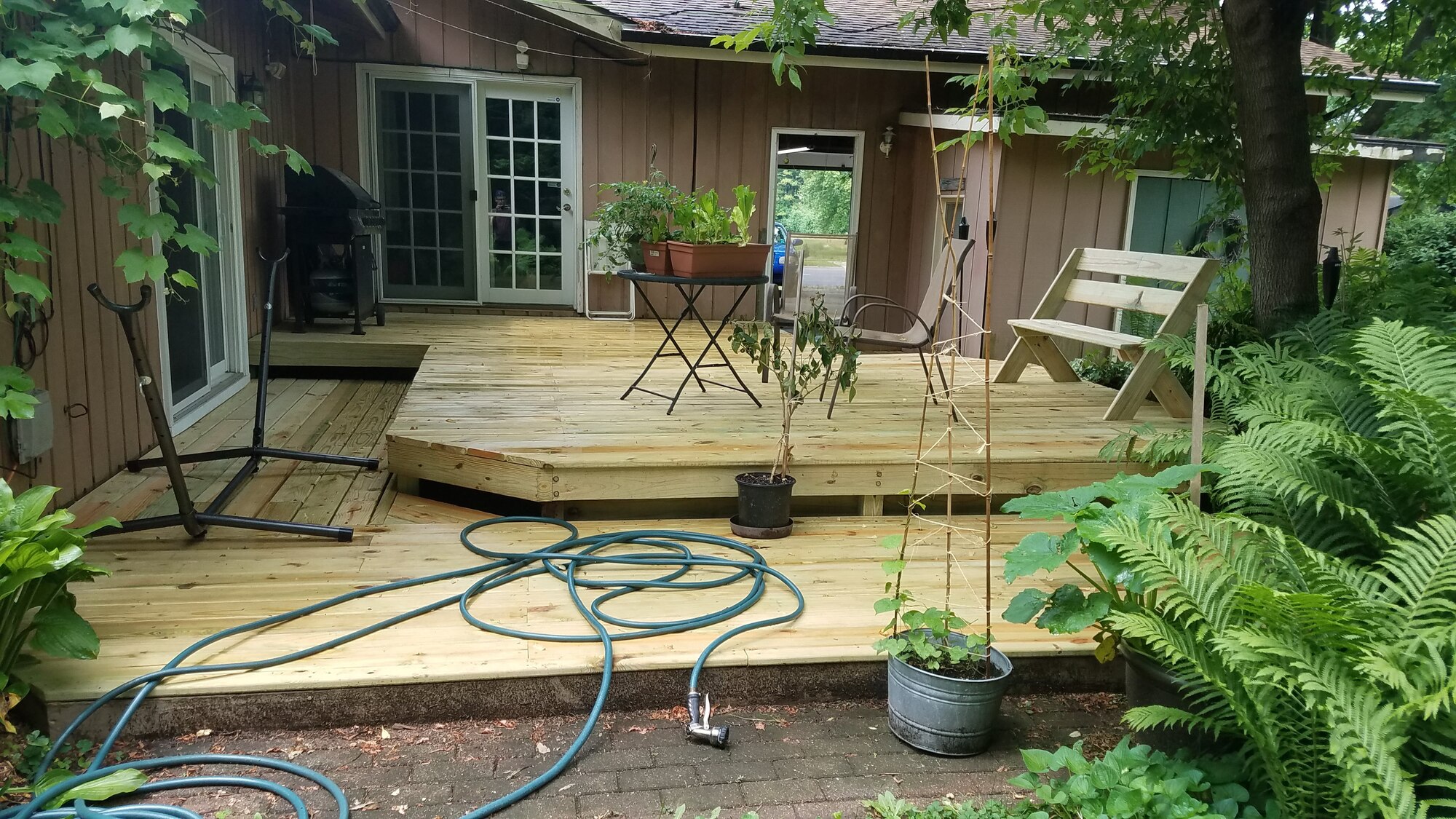 Now, if only I could fix the dishwasher and oven with a tablesaw and an impact driver.

What a week. Jeez. Last week I had a fishy catastrophe. My 40 gallon freshwater tank developed a leak at the very bottom seal, and basically dumped its guts on the carpet in the basement over the course of about an hour.